Unbelievable. What happens on the network every 60 seconds 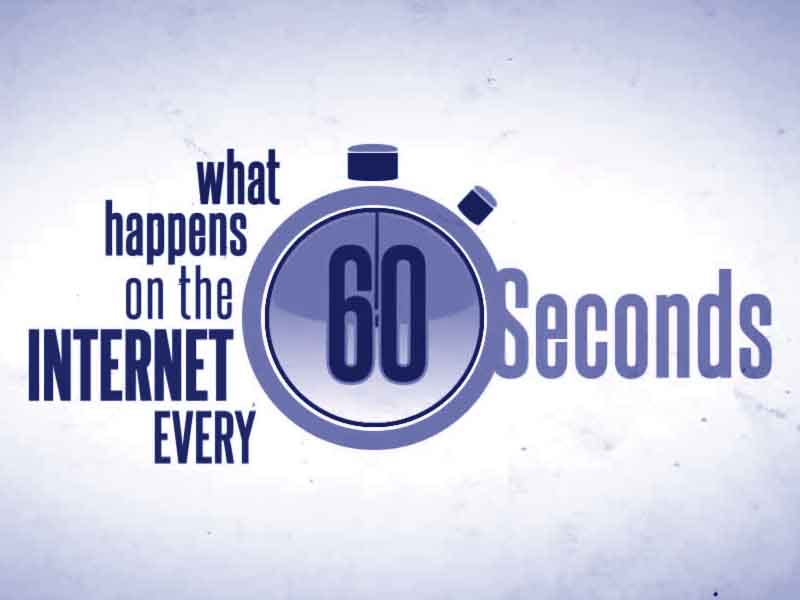 What happens on the net

What Happens On The Internet Every 60 Seconds

While on the network:

The most used search engine in the world, Google, is contacted every 60 seconds for 3.8 million requests, often carried out haphazardly, that is, people are looking for 'smaetwptking' and Google must understand that in reality you are looking for everything on 'smartworking' .

Google acquires around 240 new users every sixty seconds. And he probably knows all about them.

About 352,134 searches were made on Yahoo for one minute. Yahoo receives about 4,680 visitors every minute, while it earns $ 9,452 in sixty seconds. It's not on Google's level, but it's still impressive.

Do people also use Bing as a spell checker? I guess so but we will never know. What we do know is that Bing earns $ 7. 812 per minute and is better at researching photographic material.

Okay, these are the most important search engines. Let's see something else?

A new user signs up for Dropbox every 60 seconds.

According to Internet usage statistics, Google Drive generates $ 773 of revenue for one minute.

Reminds me of updating things about 4,312 times every ten seconds. But I regularly ignore those reminders every time. Now I digress ...

61 new users sign up for iCloud every minute. Other people who will ignore the update reminders, and already.

Do you know how many people are currently on social media?

Want to see what they do online in real time?

There are 1 million people who log into Facebook every minute. In that same minute, there are 400 new users registering on the platform.

Oddly enough, people tend to think that it is the younger generation that is addicted to Facebook. But recent research shows that most teenagers are leaving the platform.

This does not mean that Facebook is turning into a desert. In fact, those who use it seem to still be having fun and aren't quite young.

Well, Facebook may not be the trendiest social media site right now, but these numbers are definitely not modest.

347,222 people participate in Instagram every minute. So don't worry, someone will surely see the photo of your cat. The number of visitors probably doubles around lunchtime, which is the best time to post on Instagram.

Have you ever heard of the mental experiment onobservation and the perception? This poses a simple question.

To put it in Instagram words: if you enjoy a delicious lunch and don't post something about it, on social media, does it really count?

It seems that many people have embraced this philosophy, and there are so many of them, that about 44,469 new photos are published every minute.

It's no wonder that Instagram generates 2,867 $ revenue for the same period of time.

In the end, every minute, 244 new users join the platform and each of them is eager to be able to contribute to those numbers !?

I am excited to see so many people who are passionate about Instagram. Just as Mark Zuckerberg is probably.

The microblogging platform is becoming increasingly popular, which leads to higher advertising revenue. He is currently at $ 4,982 every sixty seconds.

Tumblr could be the way for millennials to create a parallel universe.

The platform receives around 243 new users per minute. The user base creates 121 new blogs in the same time period.

Although there has been a noticeable drop in active users since the purchase by Verizon Media, which has tightened in terms of censorship, an impressive number of posts are published every minute: 37,329.

However, for now, Tumblr's revenue continues to be $ 182 per minute, so let's avoid being too worried.

About 105,896 people use Snapchat every minute. 2.1 million snaps are created in the same time frame.

You know there are three types of selfies: those you send to your friends, those who go to your better half and those who will never be seen by anyone else, except you.

This may be why only 534,357 Snap are actually shared. Do two calculations of how many snaps are of the third type.

There are not only photos though. Snapchat users watch over 4 million videos every minute.

These numbers are obviously destined to change as everything changes every minute, moreover in the same period 24 new users sign up for Snapchat.

Video streaming is becoming increasingly popular. In December 2019, the SVoD segment reached around 120 million paying customers. Second Statesman, a percentage of 57% of users of video streaming services is aged between 25-44 years.

Did you know it only takes a minute to watch 4.5 million videos? Astonishing.

Not only that, but users upload 100 hours of new material to YouTube in just sixty seconds. They are not just musicians or influencers - we are talking about all users.

In one minute, YouTube generates $ 7,838. And just out of curiosity he thinks that every minute, Gangnam Style gets 1,213 views!

61 new users signing up for the service every minute.

This could be why Netflix generates $ 9,900 every sixty seconds.

Every 60 seconds, 6 new users sign up for Hulu. They earn $ 3.070 in the same time frame. With their recent deal with Lionsgate, that number is sure to grow.

We can't fail to mention Amazon Prime when it comes to video streaming services.

For every minute, Amazon Prime generates $ 5,755 of revenue. At the same time, 30 new users sign up for the service. Most likely to watch "Good Omens" !?

On HBO Go you can find content with record hits, such as "Game of Thrones" and "Chernobyl".

So it's not all that surprising that their revenue grows by $ 9. 091 every sixty seconds. The platform generates $ 3,869 in revenue over the same time period.

HBO may not be exactly the leader, but we can't deny that it has given us several quality shows.

On average, the world sends 18.1 million text messages every minute. In addition, another 41.6 million messages are sent every sixty seconds on WhatsApp and Messenger.

Millennials and younger generations hate talking only on the phone. In fact, messaging allows you to hold numerous conversations simultaneously. Can you think of talking to ten people on the phone at the same time? A nightmare, really! Plus, text is easier to ignore when you're not in the mood.

Another interesting fact is that every 60 seconds people send 188 million emails. And I'm almost sure many of these start with "Like in my last email ..." 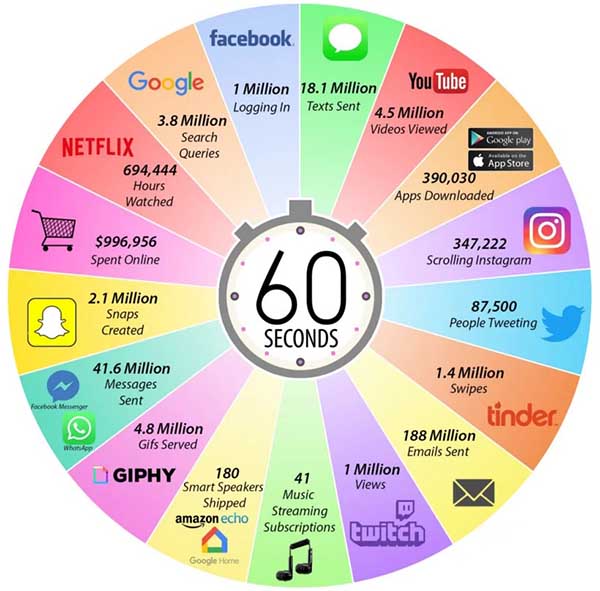 How to protect WordPress from Hacker attacks

Process images easily and for free

Does Windows 10 run perfectly? It doesn't have any kind of perfect problems! This is the moment when you need to save your "Restore Point"

The best vehicle for promoting a product or brand? Video!